Why would anyone look for Notion alternatives?

Suppose, let’s say, you need to access information in Notion but there is no internet connection. And now, Notion can't operate without it.

Or maybe you don't want to put any confidential data or media in the Notion as it's not end-to-end encrypted, which sucks! 👎

Well, there might be many reasons for which you may have to look for Notion alternatives, which is okay.

I will cover some Notion alternatives in this post. I will let you know all the things you need to know so that you can decide which tool is right for you.

7 Best Notion alternatives that are open-source and secure

Here you go! Another Notion alternative for you. It feels and works just like Notion.

But Anytype offers some features that so many users are expecting from Notion: offline access and privacy.

Anytype is also a block-based tool but unlike Notion, it stores information locally and doesn't have access to your data.

So, for Linux users who are more privacy-focused, this is the app you want to go for.

And, you can access them even without an internet connection.

Now, let's find out if it's the right tool for you:

So, is it the perfect Notion Alternative?

I don’t think it's there yet. But it definitely has the potential to be one.

But if you care about the offline access and security of your data, there is no doubt Anytype will beat most of the Notion alternatives. 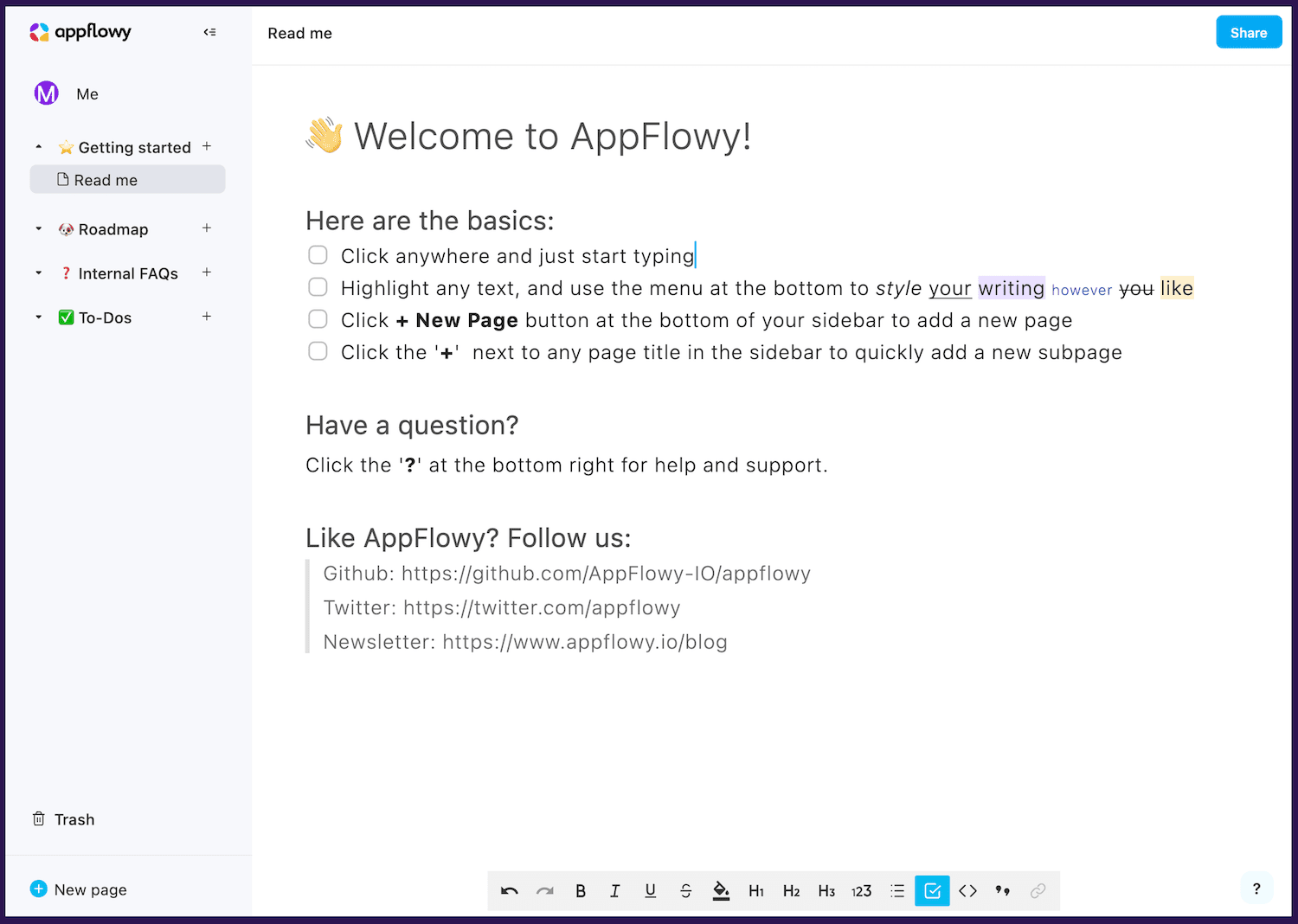 AppFlowy is an open-source replacement to Notion that provides better privacy and transparency. Let's take a closer look at what it offers.

Notion is an exceptional tool, but it's not open source and it's not available for Linux users. AppFlowy is built with Rust and Flutter, and it follows a minimal approach while still providing enough customization options. It's also an open-source project with a strong focus on data privacy. Plus, it has a single codebase for better maintenance. And finally, Community-driven extensibility is a great feature.

For the developers of Appflowy, Notion is still their favorite tool. They use it daily and are on its paid plan. However, they understand that Notion has its limitations as well. These include weak data security and poor compatibility with mobile devices.

The developers of Appflowy believe that there is a glass ceiling on what's possible in the future for tools like Notion. This is because they believe that these tools will likely struggle to scale horizontally at some point. This means that they will likely be forced to prioritize a proportion of customers whose needs can be quite different from the rest.

According to them, the main differentiating factor between AppFlowy and Notion is that the former offers "data privacy first," "reliable native experience," and "community-driven extensibility." In other words, with AppFlowy, you have more control over your data, and the platform is designed to be more reliable and extendable. As for community involvement, AppFlowy is dedicated to offering building blocks (i.e., collaboration infrastructure services) to enable users to create their own apps.

If you're someone who values data privacy, reliability, and extendability in a workplace management tool, then AppFlowy may be worth checking out. Otherwise, you might want to stick with Notion for now. I have high expectations for Anytype than this.

Coda.io is a new tool compared to Notion. But it is the closest that you can get.

In fact, Coda has the same modular layout. But unlike Notion, Coda is, what they claim, fully encrypted.

Coda is like your typical Doc tool but loaded with high-end customization. It allows you to easily create new pages, checklists, tasks, tables, boards, and other important elements.

And, just like Notion, you can use Coda for documentation, increasing productivity, and most importantly for team collaboration.

Now let's look at some of the Pros and Cons:

Despite having some drawbacks, I believe Coda is a great Notion alternative. Particularly for people who are concerned with their privacy and security.

So, if security and flexibility are somethings you opt for, Coda will be your best friend.

Well, this one is pretty interesting. Obsidian is not like any other productivity tool.

It's a no-brainer if you desire to build a strong knowledge base and enjoy taking notes.

Basically, Obsidian is a note-taking tool.

But in reality, it's much more than that. You can connect notes and create an interlinked network of all the notes similar to our mental schema.

Let me explain. What I generally do is that I take notes from different sources. It can be books, articles, videos, or so on.

But these ideas are often related to one another. Most note-taking apps fail to create a connection between these ideas or notes. That's exactly what Obsidian can do.

You can connect notes with each other and together they will form an interlinked network of ideas or brain maps. Or, what the Obsidian team calls 'A Second Brain'.

So, is Obsidian a better alternative to Notion?

It can be if you take learning, note-taking, and personal knowledge management seriously.

Students, authors, and other types of knowledge workers can benefit most from Obsidian.

This will be a great option if you are familiar with the power graphical representations of notes and ideas have to promote creativity, comprehension, and retention.

It's basically a project management tool that utilizes the Kanban board view. If you're familiar with Trello, you'll use this tool quite easily.

But unlike Trello and other project management tools, it's an open-source and self-hosted platform. So, you can access them even when you're offline.

If you've been a Notion user, you will find Focalboard similar to its board view. You can add properties like status, members, priority, and even change the view to your liking.

In fact, it looks a lot like a Notion board-view.

So, is it the Notion alternative you're looking for?

So, you might be wondering, if you should go for this one as a Notion alternative. I will say, it's up to you. If you only need the project management stuff, Focalboard can be your ally. But if your work is focused more on notes or knowledge management, you should aim for Coda, Anytype, or Obsidian.

ClickUp: The Master of Project Management

If you own a business, and your aim is to be super productive, nothing can beat ClickUp.

ClickUp is a powerful project management tool with so many advanced features that Notion and other tools don't offer.

Notion has many project management features. But not as many as ClickUp does.

It is really an amazing tool. Project Management is where it really shines.

But what if you have to take notes just like you do in Notion? You can definitely do that.

But this isn’t meant to be used solely for notes or other forms of less formal task management. That's why it's not an all-in-one workspace app.

Now let's find out if ClickUp is the tool you are looking for as a Notion alternative:

In our opinion, you should only go for ClickUp if you're serious about team and project management.

Other than that, ClickUp might be an overkill for your needs.

Another tool I want to talk about is Airtable.

In one word, it's a spreadsheet app on steroids.

You can make a table, database, assign images, make a Gantt chart, etc. You can even use their prebuilt apps to take your workflow to the next level.

But, what about other areas like note-taking, productivity, collaboration, and security?

Airtable is best if you’re more of a data person.

But if you need to take a lot of notes or highlights, then you should opt for other alternatives like Obsidian, Coda, or Anytype.

Want to take your knowledge management to the next level?

Roam Research is the tool you’re looking for.

It is best for note-taking and knowledge management.

It’s similar to Obsidian in features except it’s cloud-based. So, you can access it from anywhere.

Like Obsidian, you can connect notes and see the graph overview. But Roam Research also comes with the ability to create bi-directional links.

But do these features make Roam Research a better alternative to Notion?

Let’s look at some of the Pros and Cons first:

I will only recommend Roam Research if the primary purpose is to take notes and link thoughts and ideas.

But it’s not at all functional for tasks like project management, creating databases, team collaboration, etc.

If this is something you need, go for tools like Coda, Anytype, or ClickUp.

As you saw in this post, it’s hard to find a perfect alternative to Notion. For most of the security paranoids out there, Anytype (once it’s launched) is the closest one, or else you can go with Coda (Google Chrome based).

Would you like all the power of a database loaded with automations and not just your spreadsheet? Airtable!

If you are looking for a good project management-centric alternative to Notion, then ClickUp is the best in the game, but not for anything more than that.